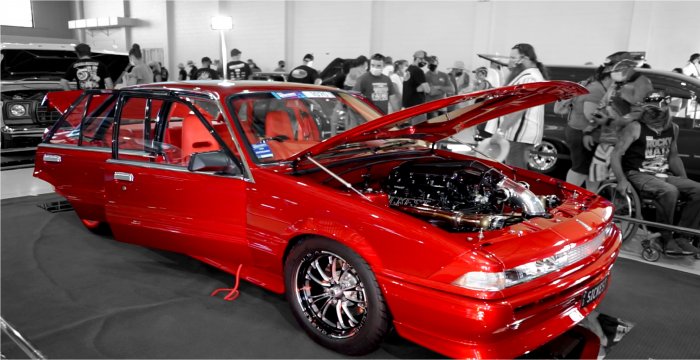 What an awesome event Rockynats was over Easter. There were over 1200 entrants and 20,000 spectators checking out the Elite hall with show cars and brand-new unveilings. On Friday morning over 10,000 people lined the 10 klm street parade route to see over 800 cars cruise through town. There were also street drags in the main street, drifting on the riverbank car park, show and shine in the closed off main street and burnouts across the river.

One of the feature cars of the whole event was Billy Shelton’s VL Commodore. Paul Butler and Billy built his car in under 12 months, truly remarkable as most cars of this calibre take between 2 – 5 years to complete. It was painted in 3 layer No Mix Sicko Mode basecoat with Eurolac clear on top. Paul had not used Concept products before and was blown away with the coverage, ease of use and unbelievable finish achieved. He also noted that he would continue to use Concept products on his future builds with a real headliner coming up. He also expressed not only what a great product Concept is but got great service and help, especially from Queensland rep Jeremy Platt who went above and beyond with support even giving a hand in his own time.

The VL was unveiled on Friday afternoon and went on to win:

The VL was competing against over 600 cars in its category, so what an incredible effort, congratulations to all involved in the build.

I’m sure we will see Billy’s VL at many more events, along with his new HQ Monaro and also quite a few more custom vehicles wearing Concept products.